In 1961 Osamu Tezuka opened his first animation studio Musi Production, and two years later, in 1963, the studio would release their first television production, Tetsuwan Atom. In September of 1963, nine months after the series premiered in Japan, its first episode was broadcast in the USA under the name Astro Boy. It was then that the, at the time, 35-year-old director Stanley Kubrick, who at that point was already an avid watcher of tokusatsu series, became a big fan of the show.

Only a few years later Kubrick would send a letter to the series’ creator, Osamu Tezuka, asking him to work as the art director on his adaptation of Arthur C. Clark’s short story The Sentinel, titled 2001: A Space Odyssey. Tezuka, being a massive workaholic turned down the offer, although he was glad to have been asked. He simply could not pull himself away from his studio for months to work on a feature film. That was the beginning of 2001: A Space Odyssey’s long history with Japan’s animation industry.

A few years after Kubrick contacted Tezuka with his proposal, the film was released to cinemas (having found a different art director in John Hoesli, who probably did a better job than Tezuka ever could have). It had polarising reception, with some claiming it was a masterpiece of film (famously Roger Ebert was an adamant defender) and others regarding it as one of the worst films ever made, an afront to cinema. But regardless of the criticism lauded at it at the time, it became a massive influence upon the next generation of Japanese animators.

And at this point, I realized that I wasn’t actually sure where to go with this post any longer. Once I finished talking about the most direct connection, where is there to go? I could just list a number of things influenced by the film (and indeed I may do that later on, at this point were going full stream of consciousness, my friends), but really, what would the point in that be? I mean, we all know how influential 2001: A Space Odyssey is, the film’s images are inescapable.

For instance, just look at the two above screencaps. Both of those are taken from anime directed by the famous (and infamous) Yoshiyuki “Kill ‘Em All” Tomino, Victory Gundam and Space Runaway Ideon respectively. And you’ve certainly seen that same composition outside of these two screencaps. It’s an image that you can’t escape, everyone and their mother has referenced that famous opening shot.

And the same goes with many other images and compositions in the film. Tomino built much of his visual style around references to 2001, the sequel film of the previously mentioned Space Runaway Ideon for example (Space Runaway Ideon: Be Invoked) is nearly an hour and forty minutes of constant visual tribute to Kubrick’s masterpiece.

And really that’s what the vast majority of 2001’s influence is when it comes to Japanese animation. It is not influential in terms of narrative structure or really even in terms of ideas (although the Getter Robo series does possibly take its theme of evolution from the film, and Gurren Lagann subsequently took it from Getter) but in terms of visuals.

And that describes 2001’s influence upon media as a whole. It revolutionized what an adaptation could be. Not in how it changed the story of the original work, but in how it adapted the narrative to work better in a visual medium. It’s interesting then, that it’s had a large impact on anime, specifically sci-fi anime.

Because really anime, for the most part, is not very visual. That may sound like a weird claim “What? Of course, anime is visual, it is animation after all.” But what I mean by that, is the majority of anime are not about their visual component, the point is not to strive for visual excellence, especially in adaptation, which tends to be very straight forward. Which is in stark contrast to 2001, which took a novel and instead of adapting it straightforwardly turned it into a gorgeous and cinematic feast for the eyes.

But nonetheless, the influence persist. Katsuhiro Otomo, creator of the famous Akira, when asked about his influences said: “In terms of influences for Farewell to Weapons, obviously Studio Nue was huge but there were also things like 2001: A Space Odyssey in there as well.” Another majorly visual director, Hideaki Anno also took massive influence from the film. Bellow, I’ve included a number of screencaps of his work which are direct tributes. Neon Genesis Evangelion itself (as well as End of Evangelion) holds many parallels to the narrative and storytelling style of Kubrick’s masterpiece. 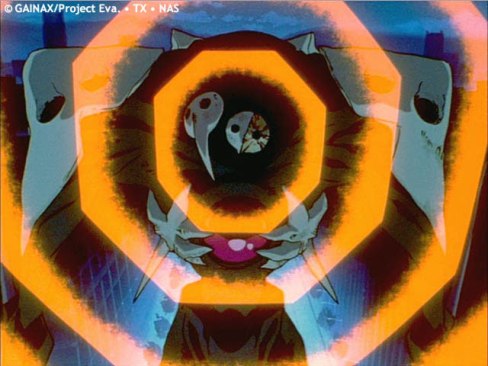 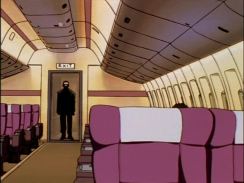 What I meant when I said that anime is not visual is that very often it puts every other element of the production above the visual element for importance. However in those moments when an anime goes full in on 2001 that changes, even if it’s only for a fleeting, yet glorious moment. When it comes to the influence of 2001 on anime I wish it had done more. I wish it had opened the floodgates of cinematic storytelling like it did elsewhere, but alas outside of a small stable of directors who were blown away by the film, and seek to imitate it whenever possible, it didn’t.

Okay now I’ve really run out of things to say, 893 words in, well 897  words now, and so on. I could have gone into more detail about specific examples, but really, is that necessary? I think it’s pretty clear how influential the film is, it totally revolutionized the look of science fiction going forward, that influence reaching as close as Hollywood blockbusters and as far as, of course, anime. I only wish it did more to the later.

This has been my portion of the “Space is the Place” blog tour. The last participator was Crow of Crow’s World, and the next will be Joe of Average Joe Reviews.